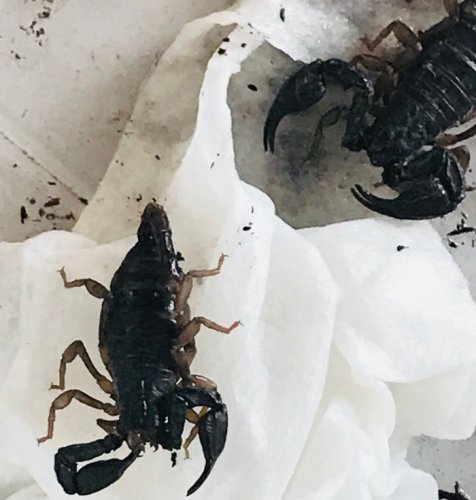 
(Keizer, Ore.) — Keizer Fire District Headquarters personnel were surprised when a member of the public brought four live scorpions to the fire station today at 661 Chemawa Road N.E. in Keizer.

After finding the arachnids in a container at Keizer Rapids Park in Keizer, the concerned citizens brought them to the fire station for safety as leaving them in the park near a play area was obviously dangerous to children.

KFD Fire Chief, Jeff Cowan accepted the scorpions in their container and began a process to determine what was best for all concerned including the scorpions.

City of Keizer Police, Parks, and staff were notified of the unusual chain of events.

Fire Station personnel had a heyday with their new found “friends” who were now fondly named… Timmy, Lynn, Ted, and Jeramiah.

Oregon Law has an invasive species act which is handled by the Oregon Department of Agriculture who maintain a staff of professional Entomologists.

The species is confirmed as our native Pacific Northwest Forest Scorpion, Uroctonus mordax.

The species is found throughout the valley. They are nocturnal, and therefore they are uncommonly seen.

They are most often found on south- or west-facing slopes, under rocks or logs on the ground, preferring moister situations.

These are not found in desert conditions.

The species mordax is not aggressive. Although they can sting (and do sting their prey when hunting), they “play dead” rather than trying to sting when disturbed.

Our scorpions are getting ready to have their photos taken.

Although mordax is not an uncommon species in the valley, we rarely see live specimens.

We’ll get some good portraits. These will then travel for outreach events like the Oregon State Fair.

As soon as they arrived, people began to have ideas about groups that would be interested as they go on to live the life of a celebrity and good will ambassador.

Although invertebrates like scorpions, spiders, millipedes, roaches, etc., do make quiet, easy-to-care-for pets or school projects, Oregon has a “white list” of invertebrates approved by the Oregon Department of Agriculture, Insect Pest Prevention and Management program that can be brought into the state without a permit.

Any exotic invertebrate not on the approved list requires a permit to ship into the state.

The approved lists are invertebrates that already occur in the state or those that could not establish outdoors to become pests.

No exotic animal should be released into the wild under any circumstances, because of the risk of introducing disease as well as any risk the exotic itself poses.

Arachnids like scorpions and spiders attract a lot of attention because of the fear factor.

Oregon has over 500 species of spiders, 3 native species of scorpions, and other spider relatives.

All are predators and all use venom to subdue their prey, but ONLY one species of spider in the state, the Western black widow, Latrodectus hesperis, is medically dangerous to people.

Any arachnid can bite if handled, but our native arachnids are not dangerous. More information at <https://www.oregon.gov/ODA/programs/IPPM/Pages/OregonSpiders.aspx>.