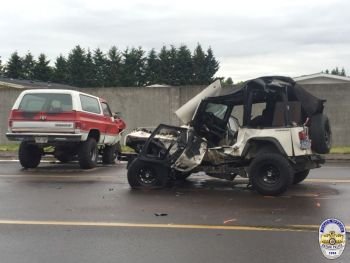 
(Keizer) — On Friday, May 22, 2015 at 2:31 p.m., officers from the Keizer Police Department responded to a report of a head-on traffic crash involving two motor vehicles on Lockhaven Drive North near McClure Street North.

Upon arrival officers found two utility vehicles that had been involved in a serious traffic collision that were blocking the roadway.

McNary High School had just concluded classes and had released students for the Memorial Day weekend.

The roadway was immediately closed to vehicular traffic and it remains closed at this time because of the ongoing investigation.

One of the involved vehicles, a 1995 Jeep Wrangler, is believed to have been occupied by two male McNary High School students.

Their names and ages are not being released at this time.

The other vehicle, a 1986 Chevrolet Blazer, is believed to have only been occupied by its driver, a male who is also a McNary High School student.

His name and age is not being released at this time.

Both occupants of the Jeep Wrangler were transported to the Salem Hospital by paramedics for evaluation and treatment of their injuries.

The extent and seriousness of their injuries are unknown at this time.

The driver of the Chevrolet Blazer was also transported to the Salem Hospital by paramedics and the extent and seriousness of his injuries is also unknown.

This traffic crash and its cause are being investigated by the Marion County CRASH Team.

This particular traffic crash is being investigated by members of the Keizer Police Department and the Oregon State Police.